Introducing a wake up clock 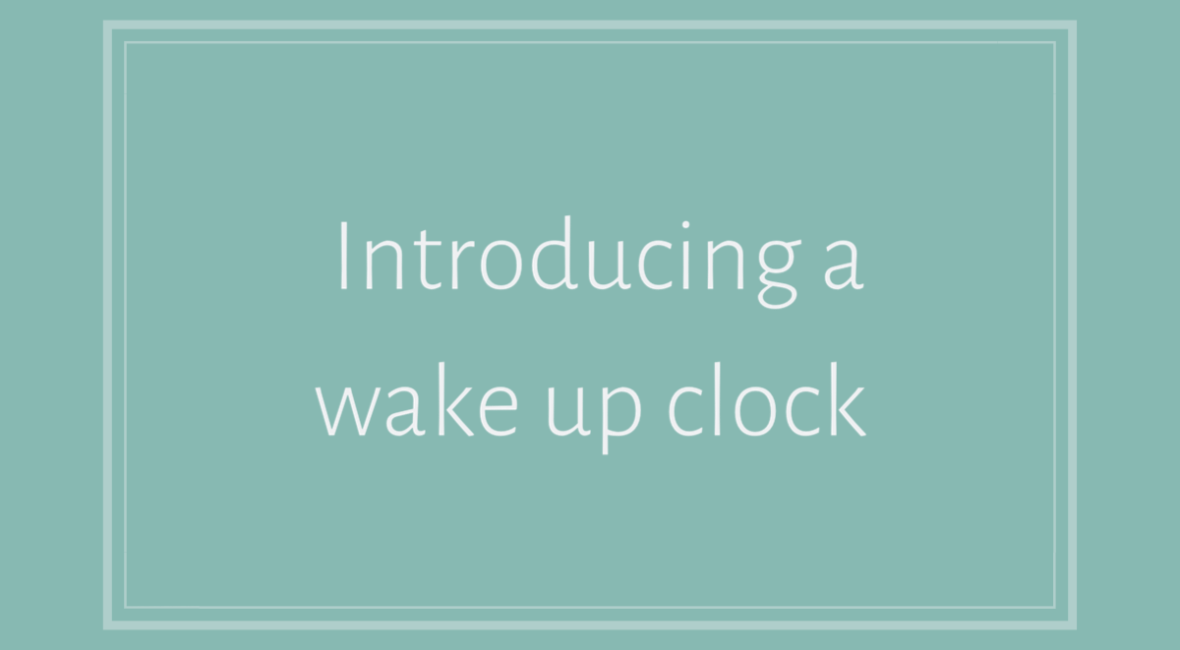 It’s 4:49am. There aren’t even any 5’s showing on the clock, yet your darling toddler is wide awake. I’ve been there. With both kids. So when each of them was around 18 months old, we introduced a GroClock.

Which clock to get

Short story, I have no idea. There are a lot of wake up clocks on the market, I’m not sure which one will suit your family best. We had success with the GroClock with our eldest, so got one for our second kiddo too.

Every time I bring up the GroClock on Instagram I get messages from people asking if their toddler is old enough to understand how to use one. Both my kids were around 18 months when they started using a wake up clock. I wouldn’t have done it any earlier but later would definitely work too.

The GroClock comes with a book but I didn’t bother reading it to either kid. I just did this instead:
Let’s say your kiddo has been consistently waking up at 5am, I’d set the clock for 5am for the first day or two. So when you put them to bed, you press the button on the clock and the sun turns into a star. We say “goodnight sun! Have a good sleep. The star is here, time to go to bed. I’ll see you when the sun comes up!” Then when you go in to get them up the first few days at 5 am, you make a big deal out of the clock. “The sun is up!! It’s time to get up because the sun is up!”
As the days go on, once the kids start associating getting out of bed with the sun coming up, I start setting the clock later by 15 minutes (or less if the kids are struggling to stay in bed). So let’s say the clock is set for 5:15 and kiddo wakes at 5am calling for you. I’d go in “oh, the sun isn’t up yet, time to lay back down. I’ll see you when the sun comes up.”
So every few days the clock is set later until you get to your desired time. BUT remember your desired time still has to make sense for your kid’s sleep. Sure, it’d be amazing if your kid would stay in bed until 8am but if they’re going to sleep at a reasonable time, that’s just not going to happen. So be realistic and don’t push it. Remember, 6:30 is soooo much better than 4:49.

Awake before the sun

Both of my kids’ clocks are set for 7am. My eldest is pretty awake at 6am and my youngest at 6:30am. So for my eldest, when he sees one star left on the clock at 6am (the stars count down from the beginning of the night), he knows he’s allowed to turn on his little light and read a book. For my daughter, when she calls for me around 6:30am, I open her curtains and let enough light in so she can read a book too. Then they both ease into the world and are ready to get up at 7am.

We use the clocks for nap time too. I’m not sure about other clocks but the GroClock has a nap option too. I’m so grateful we used the clock at nap time because it helped my eldest transition to quiet time when he was done napping.

So, right now I set my daughter’s clock for 1.5 hours at nap time. For my son who doesn’t nap, I set his clock for an hour and he plays in his room on his own until the sun comes up. Occasionally he’ll still fall asleep during that time, if he’s super tired. But usually he reads audio books or quietly plays with toys. It’s an AMAZING hour for him to reset… and me too.

At 18 months my kids were waking up at 5am (despite great schedules) and then after introducing the GroClock, our mornings started at 7am. I am so so so grateful for that extra time. The kids are more well rested and I am too.
Not every morning looks perfect. Some mornings the kids whine to get out of bed early but I never cave. Consistency is key! On the toughest, whiniest mornings I’ve sat with the kids in their room and read them books until the sun came up but that’s been rare. Usually they know, the day starts at 7am.

Do you use a wake up clock for your kids? Has it worked? If not, are you planning on introducing one? Let me know how it goes!!