How I started Independent Play 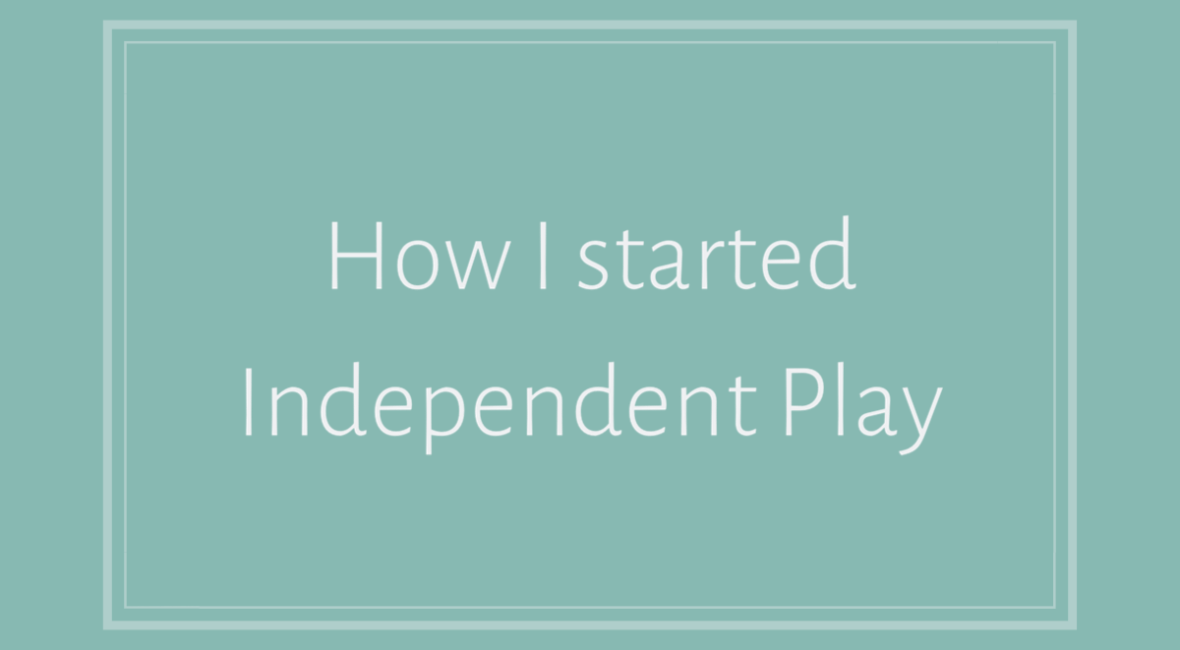 Wow, it’s been awhile since I’ve been on here. I’ve had so many things I’ve wanted to share but the last five months I’ve been so consumed by my pregnancy and sickness, I haven’t been able to.

Well, I’m back! And first up, talking about independent play. Perhaps one of the things I get asked most about.

I’ll start off with what my kids do now and work back to how we got here. So usually around 9am, my kids go for their “hang out” time, or independent play. The girlie goes into her room and up until last week the big kid, into his room. Both of their “yes spaces” (more on that in a minute) are their rooms. How long they spend in ‘hang out time’ differs daily but is usually anywhere from 15 minutes (when we need to rush off somewhere) or an hour (when we have a nice slow morning). I tell you, having an hour to myself is a LIFESAVER. Seriously. It’s a reset and helps the rest of our day. It’s also great because the kids need time away from each other. So when they hang out separately for an hour, they get along much better the rest of the day. So, how to start…

First off, you need to create a yes space. I got the idea and term from Janet Lansbury. Essentially it’s a safe space for a child that consists of no no’s. So there’s nothing in their yes space that could get them in trouble. This is easy when a child is a baby but gets harder as they get older. So in my kids’ rooms, the windows are locked, gate on their door, all furniture fastened to the wall, outlets covered, no inappropriate (choking hazard) toys. You want to feel like if you got locked out of your home and your child was in their yes space, they would be safe until you returned. The size of the space depends on the age of the child. A newborn – their yes space can be a playpen. A 6 month old – their yes space can be a gated off area big enough for them to move around a little bit. A 1 year old – they’re going to need more space.

WHAT TO PUT INSIDE

For the toys that go inside, I recommend toys that are open ended. Here’s a great explanation and list from Busy Toddler about open ended toys. It also depends on your kid. My older kiddo doesn’t have many toys he enjoys, so I’ve had to be creative. The best purchase for him was a CD player from Value Village, a few CD’s and read long books like this. He also loves dress up toys and musical instruments. For my younger kiddo, she’ll sit and play with toys, so I have an assortment for her. She has a few dolls, doll stroller, crib and high chair, balls, some puzzles, lots of various things. She also loves “reading” so a cozy area with access to books is where she’ll often spend most of her time. The little one also really enjoys colouring so I bought her things like these and these that she could colour without making a potential mess.

If your child loves to climb, you can put a low to the ground slide (we got this one used) inside with some padding underneath. We bought these blocks (which were NOT this price when we bought them, I’m sure you can find alternatives somewhere) and they were a hit with our girlie.

Find what your kids are doing naturally, and make a way for them to do it safely and independently.

In a perfect world, you’re starting when they’re a baby. This is what I did for my youngest. It started with me putting the play pen beside a window. She’d stare outside at the world for long chunks of time on her own. Then I had time to spend 1-1 with my oldest or get something done around the house. Then as she got older I added a few toys and a bigger space. When she was around 6 months I moved her yes space to her room and she would army crawl around her room and entertain herself for long periods of time, from the get go. She rarely ever whines about her yes space time.

My big kid on the other hand, I started when he was a toddler and it was much more challenging. I WISH I’d started when he was a baby because as a young toddler he was constantly exploring and always getting into trouble. It would’ve been so much more peaceful for both of us if he’d had a place to safely explore. I started with the big kid when he was around 21 months old. Baby girl was here (they’re 20 months apart) and he would terrorize our home while I cared (nursed, changed) for her. One day I gave her a quick diaper change and in that time he had figured out how to open our back door, deck gate, gone down the dangerous stairs into the backyard, figured out our side gate and I found him in the front yard. All in about 2 minutes! Or he’d get jealous of his sister while I nursed her and would try and get her off my boob. So, I knew we needed to do something to keep both kids safe and keep me sane. He needed somewhere safe to go while I cared for his baby sister.

HOW WE STARTED WITH A TODDLER

After his room was safely set up (including a gate on the door), we started spending time inside the big kid’s room, playing together while his baby sister napped in the morning. Every once and awhile I would say something like “I need to pee, I’ll be right back” and I’d lock the gate and leave. If he whined about me leaving I’d say “you don’t want me to leave, I’ll be back in 3 minutes though” and I would always follow through. Returning when I’d say I would was a big thing for him. Then I gradually started increasing the amount of time, “I’m going to go make your snack, I’ll be back when I’m done.” This was always at the same time in the morning. Then once it was getting more predictable, I would time my exit when I knew baby girl would soon be waking up. So I never used her as an excuse for leaving the room, but she always happened to wake up while I was out of his room and he was safely locked in. Since this was always happening in the same way at the same time of day, he got more comfortable being in there on his own. Then I started being able to leave him for longer periods of time. I had enough time to go pee, then nurse the babe and return to him. Then he was comfortable in there long enough that I could pee, nurse her and change her. Then he was still happy on his own so I would nurse her, change her and then spend some 1-1 time with her. This is when I’d give baby girl A TON of kisses and snuggles. This is when I told her how cute and adorable she was. She got all this love in, but her brother didn’t have to witness it and get jealous. But he got the same thing. When she was napping, before I left his yes space, I would do focused play with him, cuddle him, wrestle him… give him the connection he was craving (which was more intense since his little sibling had arrived).

Since this has been our routine for two years now, the kids just get it. They’re used to it and actually enjoy their time alone. The big kid will still whine (he’s naturally an ornery guy) but once he’s in, he’s generally happy. So for us, a slow morning looks like this:
Up, screen time
Breakfast
Clean up
Bathroom stuff (wash face, brush teeth, etc)
Connecting play (I’ll read them books or get on the ground and play with them)
Yes Space time (their connection cups are full, their bellies are full, they’re okay to separate from me for awhile)

A child who hasn’t had enough connection time will have a very hard time separating. Sometimes one kid needs a little extra time. So when I put them in their rooms to hang out, I’ll go into that child’s room and play with them 1-1 for a bit to give them that time they need.

But it’s alllll about routine. Our mornings generally look the same, every day. I understand this will be hard for full time or part time working parents. Maybe your yes space time will be in the evening at the same time every day, while you make dinner. If you do this, remember your kids’ connection cups need to be full first. So if they’ve been at daycare all day, they’ll need some major connection time before they can be expected to separate from you.

I hope this helps explain how we went about independent play! Remember it’ll be different for every kid and every family and it’s not something that happens right away.

Do you have any tips for someone hoping to start their kids on playing independently?