Negative Pregnancy Talk that Changed my Pregnancy: Or how I became a badass big bellied rockstar of a pregnant woman 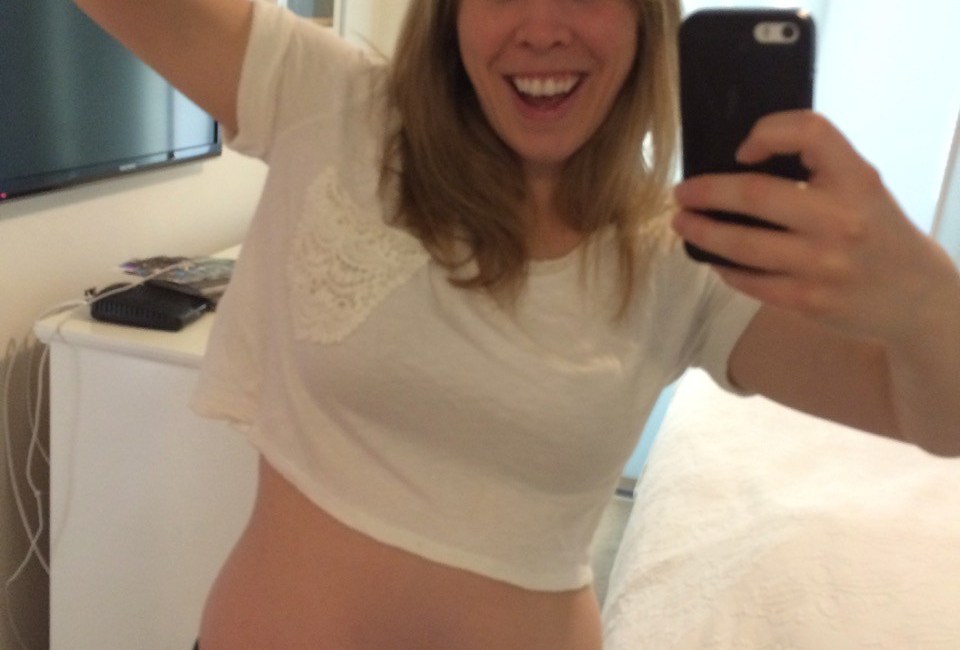 “How much weight have you gained?”

“Pardon? Did you just ask me how much weight I’ve gained? Screw you.” Then I gave him the middle finger and walked away.

That was word for word a conversation I had with a male acquaintance at work when I was pregnant. I had never really talked to this guy before, “hi’s” and “how are you’s” in the hallway – that’s about it. So I was pretty damn taken aback when this dude asked me how much weight I’d gained. Sticking your middle finger up at someone at work is probably not the best thing to do… but it was just my gut reaction. That and punching him in the face but I was able to stop myself from doing that. Lucky for him.

What was most shocking to me, is this kind of negative pregnancy talk happened ALL THE TIME throughout my entire pregnancy.

Suddenly it was okay for everyone to talk about my body. MY body.

As a woman, I’ve had my host of body image issues. But I’ve tried to rise above those and be happy and healthy. If inspirational quotes have taught me anything, it’s that I should be strong not skinny – or whatever BS skinny bitches are trying to tell me. That and to “eat dessert first.” I definitely take that one pretty literally.

The funny thing about my colleague’s question was that I didn’t have the answer. Yes, I was a pregnant woman in my third trimester… BUT I had no idea how much weight I’d gained… isn’t that weird? I couldn’t even guess what I weighed.

Why? Well, let me tell you.

I was around 5 months pregnant, I went into the doctor’s office for a checkup. I was feeling fabulous! The extreme morning sickness I’d had for months prior had worn off and I’d even started running daily again. I felt good. Then the doctor’s assistant called me in and told me to jump on the scale, one of those old fashioned metal ones that only doctors offices still have. As she was sliding that stupid bar up and up, my anxiety started to skyrocket and my confidence plummeted. She wrote down the number. I cringed.

As I walked (waddled) into the little room and waited for the doctor. How could this happen? How had I gained so much more weight than I thought? When the doc came in I told how angry I was at her stupid giant scale and my stupid giant belly that was weighing it down. Then she said the most freeing words to me I’d heard my whole pregnancy…

Then stop getting weighed

What? I could do that?!?!? How was this not relayed to me as an option earlier?

The doctor elaborated, “Of course. I refused to get weighed when I was pregnant. As long as your baby is getting bigger and you’re both healthy, it doesn’t matter what you weigh. Just say no next time.”

Flash forward a month, at my next doctor’s appointment. I was sitting in the waiting area… preparing. I could say no. I will say no. I can say no. I will say no. Why the heck was this such a big deal? I’ve been taught my whole life to be a strong, confident woman and I can’t say no to a 25 year old sitting behind a desk. Then the moment came.

“Alright Alex, let’s get you weighed.”

“NO!!” (shit, I think I said that a little loud. So I cleared my throat, ahem) “No thanks! I’m not going to get weighed anymore this pregnancy.” “……The doctor said it’s okay!!!!” I added for good measure.

Then the best thing ever happened

She put a big cross through the area where my weight was supposed to be recorded for the remaining of my pregnancy.

So, flash forward to when that colleague of mine (who probably just had no idea what to say when he bumped into me while getting coffee) asked how much weight I’d gained, I truly didn’t know.

When you’re a pregnant woman, your body suddenly becomes public property. People touch you, they ask very personal questions and often, the focus is on YOUR body.

Your body is taking on the GIANT task of growing a human, so give it a break and give yourself a break. Focus on the beauty of what you’re doing and the absolute blessing of what’s growing inside that big belly.

The next time someone asks about your belly or size, throw it back at them!! Be your body’s advocate. “Gosh I’m tired of talking about my size, can you ask about the baby instead?!” Or if you’re a little bit direct and rude like I am, saying “screw you” and giving someone the middle finger seems to get the point across too.

Whatever. Just be a badass big bellied rockstar of a pregnant woman. It’s much more fun anyway.

I hope you’ve enjoyed reading my negative pregnancy talk blog post! Check out my musing blog section for discussions on other amazing topics that are very important to me.