The Thing About Sleep… or Lack Thereof 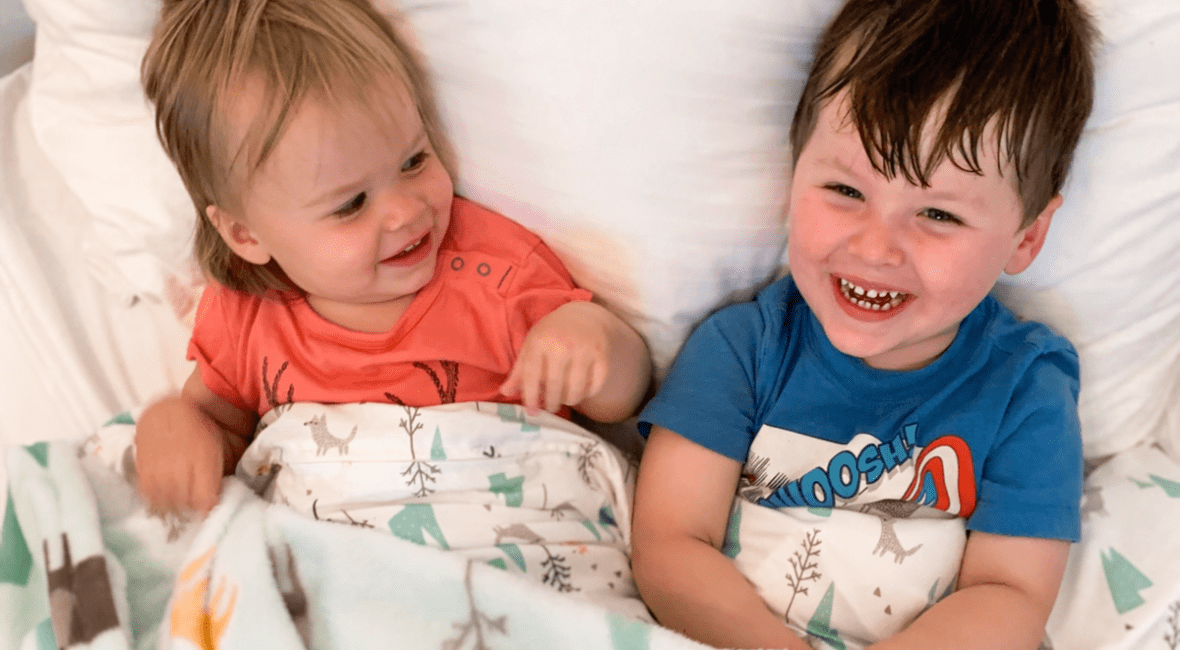 The much needed and very literal wake up call from my baby and toddler.

When I was pregnant, I talked to a friend of mine who had a 6 month old baby. My friend had gone back to work early, she looked GREAT every time I saw her and her baby had been sleeping through the night for awhile. I asked her what the trick was.

My friend said her baby fell asleep at 7pm and woke up at 7am. 12 beautiful hours away from the baby.

So when I had my first, I read the same books she did and prepared myself. I was looking forward to having 12 hours to myself every damn day, once we were out of the newborn phase.

So, just as she did, after the four month sleep regression, we did sleep training. I won’t get into how we did it because I wouldn’t do it the same way again. But needless to say, it happened. My kid was sleeping 7-7… the dream.

But then… he went through a development leap. And he woke up at night again. I was so flustered.

How can this be?!

Child! What’s wrong with you?! You’re supposed to sleep through the night forever more!!

After a few nights of trying to “handle” it, he went back to sleeping through the night. Phew, dodged a bullet there.

And then, teething. Up all. night. long. And then another developmental leap. And then teething and a leap and sick!!! Dear gawd. This child was trying to kill me.

My eldest is a particularly sensitive child. He’s sensitive to emotion, change and everything else in between… it all hits him hard. So I thought it was just me. I’d heard about friends’ kids sleeping through the night once and then forever.

Then my baby became a toddler and it didn’t end. He mostly slept great but sometimes didn’t. I was aghast. He wasn’t a baby anymore and STILL had trouble sleeping?!

Then we had another baby when my eldest was a mere 20 months old and suddenly I had two kids waking in the night!

That’s when I finally had a wake up call. In the form of two crying kids at 2am.

Parenting doesn’t end at 7pm. You don’t get 12 hours off, regardless of whether you believe you’re entitled to it!

You can be the perfect parent all day long but unfortunately, your job isn’t done at 7pm. The newest research on the brain is pretty clear, your children need you all the time, not just 12 hours a day.

BUT, that doesn’t mean you have to cosleep, nurse to sleep or start other habits you don’t want to because you want your children to be appropriately attached to you.

You can help your babies learn to fall asleep independently. You can do SO much to help your kids sleep in their own room, in their own bed, if that’s what you want.

BUT, it won’t look perfect every night. And that’s just the way it is.

If your parents or your parents parents say they put their kids down and never came back to them until the morning. Well that’s good for them but it’s not appropriate now, considering what we know about the brain and attachment. So try not to compare to a different generation.

Now, I have a preschooler and a toddler. They’re both great sleepers. They fall asleep on their own and generally sleep through the night without us. However, we still have shitty nights. Last night my little one took awhile to fall asleep and then was up for 2.5 hours in the night. Then her brother woke up to pee at 3am and woke up for good at 5:30am. I got about 3 hours of sleep total, between the kids.

But that’s life and that’s parenting. It’s hard. And anyone who disagrees, is just a big ol’ liar who’s secretly struggling.

Hopefully you’re not in this alone. Hopefully you have a wonderful co-parent so you can tag team these long nights. Or at least have someone to commiserate with.

Hopefully you have supportive friends and family to help you during the day after a long night.

But definitely, it will be hard. And worth it. But hard.

And that friend who had a perfectly sleeping 6 month old angel baby… well let’s just say at a mere 6 months, her parenting journey was just beginning too. And her (middle of the night) wake up call(s) would come eventually.